Our Multi-‘omics Atlas Project (MAP) will use an unprecedented range of advanced techniques to examine tissue from eight different regions of the Alzheimer’s Disease brain.  This will gain a much fuller understanding of key cell characteristics, including what influences the genes of individual cells to be expressed, and the role of proteins and other factors on their function.

The UK DRI Multi-‘omics Atlas Project is an open resource dedicated to the comprehensive, multi-omic mapping of the cellular pathology of Alzheimer’s disease over representative stages in its evolution (MAP AD).

Neurodegenerative disease manifests through interactions between cells throughout the brain; it is not a cell- or region- autonomous process and the pathology evolves in a complex way from primary dysfunction (accumulation of misfolded proteins) through  to secondary pathology (inflammation and synapse loss).  Characterising these pathological changes is central to the development of new diagnostic, monitoring or therapeutic tools.  There is an immediate opportunity to rapidly improve understanding of these processes by exploitation of recent, transformative advances in multi-omics, imaging and computational methods.

Working with Brains for Dementia Research, the UK Brain Banks Network and Alzheimer Scotland Dementia Research Centre, our team will develop a tissue resource of carefully selected, well-annotated and centrally managed brains with one hemisphere frozen and the other hemisphere fixed for microscopic analysis. Material from eight standardised sampling regions will be studied, both at the level of the single cell and by observing multi-cellular characteristics. As we establish the resource, we plan to tackle key, previously unanswered questions about tissue quality that will help refine similar studies in future.  This will include how time between death and freezing of tissue impacts its quality and what is the best measure of tissue quality.

All data and spatial information will be compared across different brain regions and at different stages of the disease. By studying tissue at the early stage of illness, we hope to determine the most optimal time to target the disease before widespread neurodegeneration takes place. Efforts to target the late stages of Alzheimer’s disease have thus far proved ineffective, and the field is now focusing efforts on developing therapies to be given as early as possible to alter the course of the illness.

During the initial three-year pilot, we will study 12 brains of human donors who had Alzheimer’s at different stages of the disease, and six brains of donors without Alzhimer's Disease. Eventually, we hope to increase the number of brains studied to 48, to further enhance our understanding of the disease process. The project is designed so that it can be extended to include new techniques as they are developed, using the same set of donor brains, and to add new data to the existing dataset. We hope that the study could eventually be expanded to map the pathology of other neurodegenerative diseases. 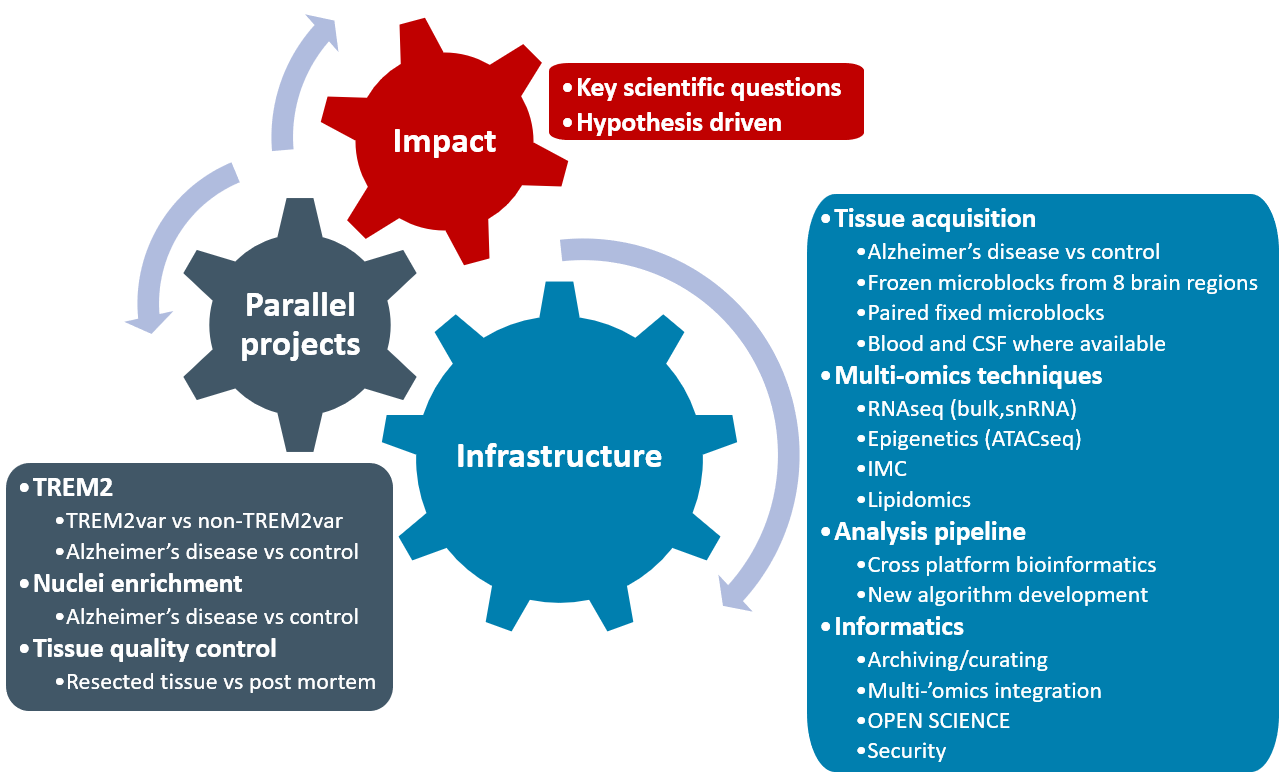 About the UK Dementia Research Institute

Launched in 2017, the UK DRI is the single biggest investment the UK has ever made in dementia thanks to £290 million from founding funders the Medical Research Council (MRC), Alzheimer’s Society and Alzheimer’s Research UK.

Our Multi-‘omics Atlas Project has been publicised in a number of articles this year...